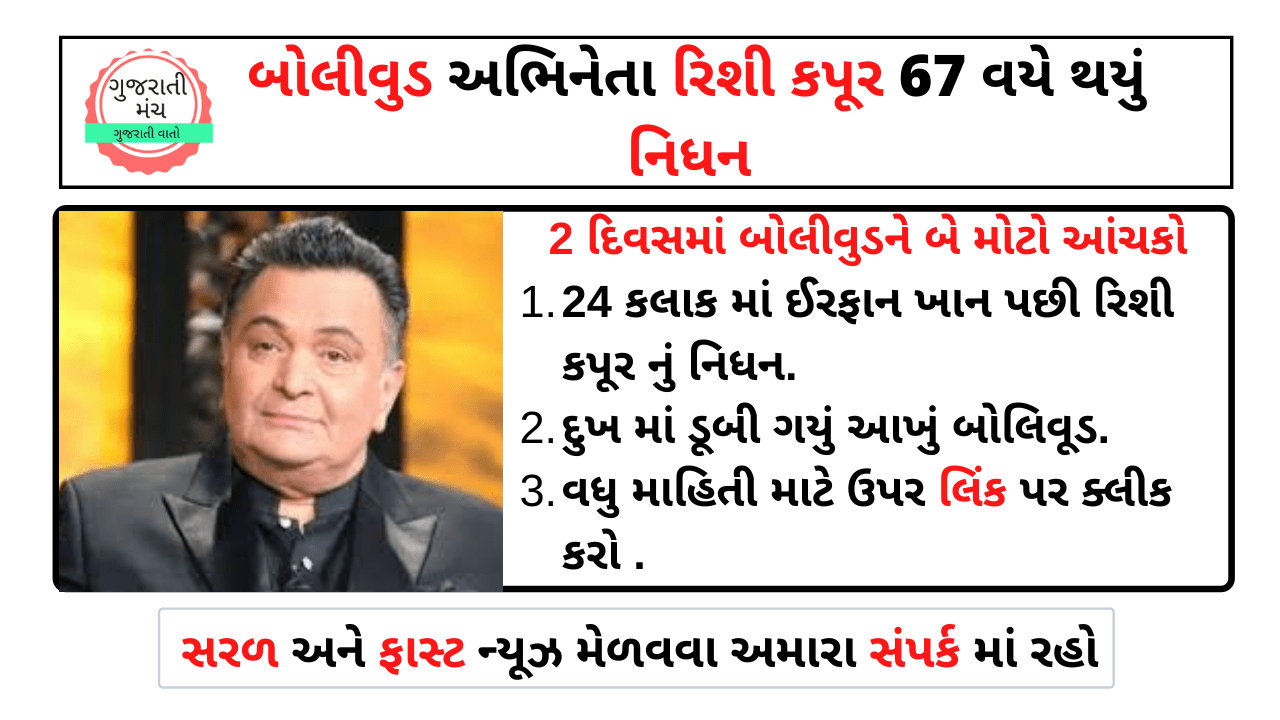 Bollywood actor Rishi Kapoor died at the age of 67

Actor Rishi Kapoor (67) died on Thursday morning at HN.Reliance Foundation Hospital in Mumbai. Amitabh Bachchan gave this information by tweeting. Rishi returned to India from the US in September last year. His cancer treatment went on for about a year there. According to the information, Rishi Kapoor has chest infection, difficulty in breathing and mild fever. His Kovid-19 Test will also be conducted. Two specialist doctors are treating him.

His health has been reported to be poor since last Thursday. He was also admitted, but was discharged four hours later. He was also issued a special pass by the Maharashtra government to visit the hospital. His medical reports were also sent to BMC and Health Department.

Rishi Kapoor had cancer in 2018. He went to America for treatment. He returned to India in September last year after staying there for 11 months. He was accompanied by his wife Neetu the whole time in America. Son Ranbir Kapoor went to New York to meet her several times. A few days ago, Rishi said in an interview, “Now I feel much better. And anyone can do any work. Wondering when to start acting again. Don’t know if people will like my work now or not. I was bloodied several times in New York. Then I told Neetu – I hope that despite the new blood, I will not forget the acting.

Rishi was hospitalized twice in February

Rishi Kapoor was hospitalized twice in February. Once when he went to attend a family event in Delhi, he was admitted to a hospital there. At that time, the sage himself said that he was suffering from “infection”. After returning to Mumbai, he was again hospitalized due to viral fever, but was discharged after his health improved quickly.

Away from social media for a month

Rishi, known for his logical and offensive comments on social media, did not post anything on Twitter account after April 2. She had also announced to work with Deepika Padukone in the remake of the Hollywood film “The Intern”.

Fans had arrived in new york

When Rishi was undergoing treatment in New York, his friends and loved ones continued to know about his health there. These included Priyanka Chopra, Alia Bhatt, Anupam Kher, Aamir Khan, Shah Rukh Khan, Deepika Padukone, Karan Johar and Malaika Arora. Rishi was last seen on screen with Emraan Hashmi.

Rishi Kapoor’s death is a big blow to the film industry, stars immersed in sorrow